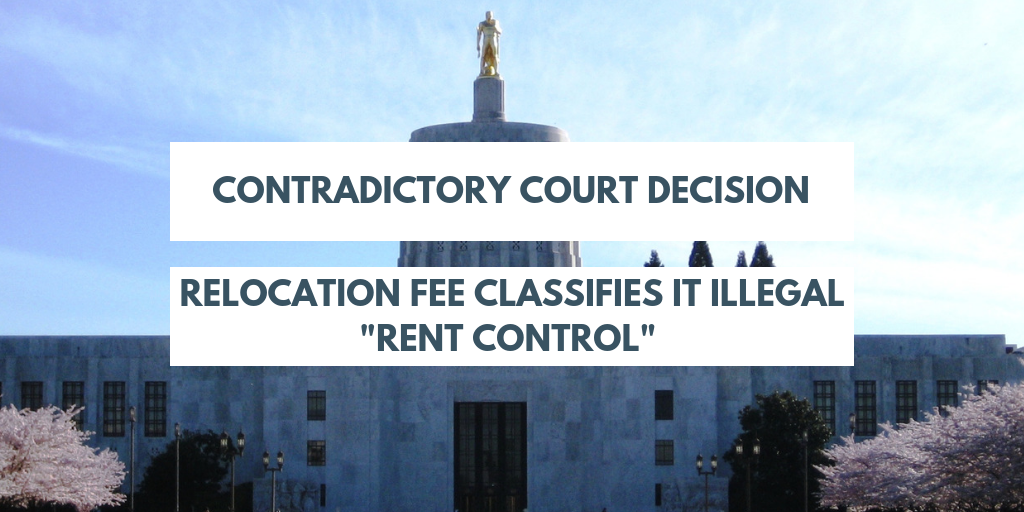 A Multnomah County judge’s recent decision could throw into disarray a city policy that requires landlords to pay tenants who are evicted without cause or leave their apartment because of a big rent increase.

Circuit Judge Judith Matarazzo said the city ordinance amounts to rent control, which the Legislature barred cities and counties from enacting in 1985.

“To me, rent control is rent control, and the city code or city statute is an attempt at rent control,” Matarazzo said from the bench March 8. She hasn’t yet signed a written order. It came in a lawsuit filed by a Northeast Portland renter who received a notice of a rent and utilities hike last August.

Her pending ruling contradicts that of a peer, Multnomah County Circuit Judge Henry Breithaupt, who ruled in 2017 that the ordinance “clearly does not” control rent. Breithaupt’s order came in response to a separate lawsuit brought against the city by a group of landlords.

That case is now before the Oregon Court of Appeals and until the Appeals Court makes a ruling, expected later this year, the relocation payments could be decided case by case and judge by judge.

Portland’s policy requires landlords to pay tenants a specified amount — $2,900 to $4,500, depending on unit size — when they’re evicted without a stated cause or leave because the rent was increased by 10 percent or more. The amount is intended to cover moving expenses, as well as help with fees and deposits to secure a new rental.

But the city doesn’t enforce the policy. Rather, the ordinance gives renters the right to go after landlords who don’t pay relocation assistance in civil court.

The recent ruling suggests the Multnomah County judges who would decide on the relocation assistance cases are divided on the policy’s legality.

The case decided this month was brought by a Portland renter, Janet Walsh, who argued under the ordinance that her landlord had failed to provide proper notice of a rent increase that included new utility costs.

Her landlord, Binford Ventures LLC, and property manager, Affinity Property Management, argued that she didn’t have a legal claim because they never actually put the notice into practice — and they also argued the ordinance amounted to illegal rent control.

“When you impose draconian penalties on landlords for raising rents, you are engaging in rent control,” said Jim McDermott, an attorney for the plaintiffs. “The trial judge saw through the city’s transparent attempt to camouflage it as not rent control.”

An attorney for Portland’s city government said it could attempt to intervene and argue against the finding before Matarazzo makes her order final.

“The city was not a party to the case, but we’re currently reviewing the transcript and the record of that case and weighing our options,” said Deputy City Attorney Denis Vannier.

Credit: Elliot Njus of The Oregonian