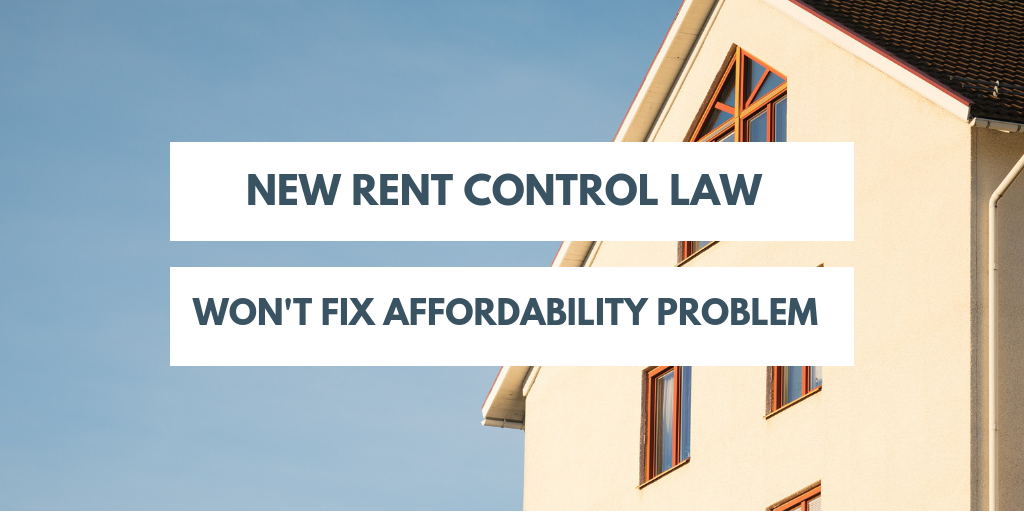 Oregon Governor Kate Brown yesterday signed into law a statewide cap on rent increases—the first statewide policy of this kind. The economic rationale is to lessen financial strain on renters, given that housing costs have risen faster than incomes. In many large cities along East and West Coasts, even middle-income families are stretching to pay for good quality housing in desirable neighborhoods. The political motivation behind Oregon’s new law is also clear: Unhappy rentershave emerged as a more vocal constituency across the country, and policymakers in both parties, from Boston to Minneapolis to San Diego, are taking notice.

But Oregon’s new law will not fix the underlying problem of high housing costs, and it could even make matters worse for vulnerable families.

The U.S. Has Two Housing Affordability Problems. Rent Control Won’t Fix Either of Them.

The first affordability problem is that the nation’s poorest 20 percent have too little income to afford minimum quality housing without receiving subsidies. That’s not a failure of housing markets, but a function of the low wages and unstable incomes generated by labor markets. Poor families could be helped by expanding existing programs such as housing vouchers or the Earned Income Tax Credit (EITC) to cover more poor households. But to fund those programs, middle- and higher-income households would have to pay more in taxes—which state and federal lawmakers have been reluctant to propose.

The second, more challenging affordability problem is that over the past 40 years, the U.S. hasn’t built enough housing in the locations where people most want to live. Metropolitan areas with strong labor markets and high levels of amenities—including Portland, Ore., Seattle, Wash., most of coastal California, and the Northeast corridor from Washington, D.C. to Boston, Mass.—have underbuilt housing relative to demand. The same pattern is true for neighborhoods within cities. Affluent residential areas with good public schools, access to jobs and transportation, have effectively shut down new development of anything other than expensive single family homes on large lots.

The only effective long-term fix to the housing scarcity challenge is to build more housing—especially building less expensive housing in cities and neighborhoods where demand is high. This would require substantial changes to local zoning in nearly every U.S. city. But homeowners are a powerful lobby at every level of government, and only a few bold electedofficials have dared to challenge the NIMBYs.

The Oregon law tries to foresee and forestall some ways in which rent control can push landlords and developers into harmful responses. For instance, when landlords cannot raise rents, they often choose to not provide adequate maintenance. The Oregon law allows relatively generous annual rent increases of 7 percent plus inflation to avoid this problem. Although the bill is thoughtfully designed, any such regulations create incentives for developers and landlords to seek out loopholes. Past research shows that property owners in rent controlled cities are more likely to convert apartment buildings into condominiums. A developer considering building an eight-unit apartment building might revise their plans to build only five apartments, just under the cap set by Oregon’s law—thus contributing less new housing overall. Landlords may pre-emptively raise the rent more as they approach the 15 year mark when controls kick in. Even the increased tenant protections could backfire, encouraging landlords to screen out less desirable tenants—including many low-income families with young children.

Fixing Housing Affordability Will Require Courage From Politicians, and Some Sacrifices From Affluent Voters.

Rent control is similar to another popular housing policy, inclusionary zoning, in that it tries to push the onus for improving housing affordability onto for-profit developers and landlords. Self-identified progressive homeowners may be willing to support politicians who advocate these policies. But neither rent control nor inclusionary zoning address the underlying causes of housing affordability, and indeed have the potential to discourage new supply and make the problem worse. Politicians need to be honest with their constituents about the cost of better policies as well as the costs of failing to act. Affluent households should pay more taxes to support poor families, and should allow new apartments in their own backyards.